Best Horse of a Different Color


(horseproject.home.comcast.net):  little plastic horses tied with steel cable to the historic horse rings that dot the curbs along Portland’s sidewalks is a must see. The project is approaching its first anniversary with astounding success. Not only are the horses now everywhere you look, but herds of pigs have been popping up as well! 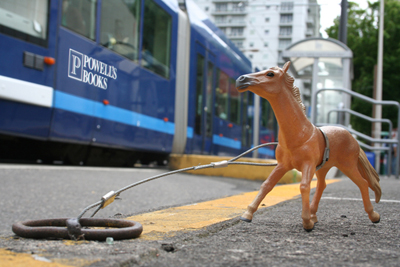 Maybe Indiana was inspired by the large horse outside Dazzle at Northwest 23rd Avenue and Irving Street. Owner Faviana Priola found the unnamed stallion in 1990 at an antique market underneath London Bridge and liked him so much she shipped him home from the U.K. Indiana's comment on the Dazzle Horse? "I think they should tie him to the nearest horse ring, so he doesn't run away, but maybe he's well trained." Shouldn't be a problem—Priola brings the horse in to sleep every night.

I recently attended a Continuing Education Design webinar presented by Benjamin Moore Paint for Designers.  Thought I’d share some of what I learned.  It was about the Color forecast for fashion and design for 2013. Fasten your seat belts! They labeled the new style "intersection".  Although it was a mixture of many styles, textures and colors, the main theme was taking things that had become useless and making them into “Cool”!  These would be items that already had a history but may not be functional in today’s world.  Revisit your past in your present!
They also spoke about how the virtual world impacts the world of fashion:


UK's Kingston University design student Lee Wei Chen realized that the skills he developed playing a lot of video games are practically useless in real life, so he set out to do something about it. 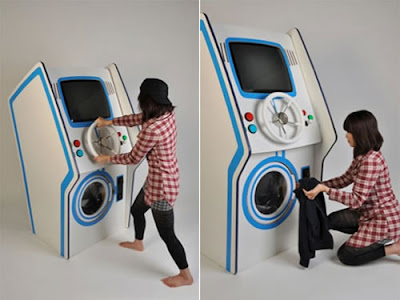 Behold, the washing machine/arcade combo, where the likelihood of getting your clothes cleaned depends on your ability to play the game:

The machine looks like an arcade style video console – but the bottom half of the unit is a washing machine, with the components’ circuitry linked together. Therefore, the washing cycle is dependent on the success of the person playing the game, meaning that if they struggle, extra coins are needed to make sure the washing cycle is completed.
Chen’s course leader, Colin Holden, says, ‘He’s chosen two instantly recognisable objects – a washing machine and an arcade game – to illustrate this idea. Together the two objects produce a striking new electronic device. It’s an extremely well-executed design concept.’
Despite the genius behind the idea, it seems Chen is still far from becoming a domestic god, remaining blissfully unaware of the nuances of actually washing clothes.
‘I don’t even know how to choose the programme,’ he says. 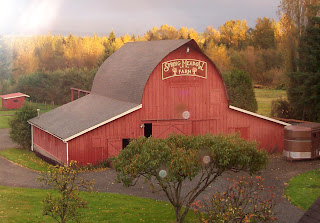 
We just heard from Paula in Oklahoma with some clever ideas for Old Brass Harness Hardware.

I know these look like simple drawer pulls but they are actually from an old harness that had all brass hardware on it. These pieces were used to keep various straps in place. As you can see they are just wide enough for a 2" piece of strap to go through. 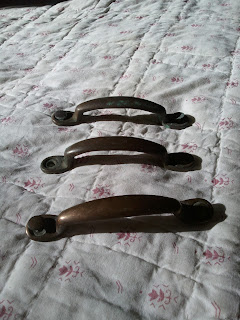 Besides these pieces of hardware, there are always lots of 2" rings that you can do tons of stuff with. To stick with brass you will have to find older harnesses. The newer harnesses are silver.  They are still pretty and quite useful but just don't have the character of the brass.
This is how Paula used the brasses for picture hangers: 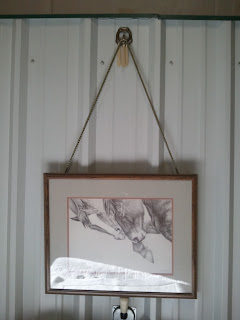 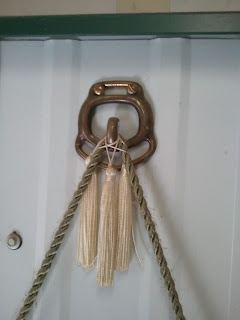 We went on Ebay and looked for Harness Brasses and found this one.  Not as nice as Paula's ....so it might take a little hunting.... but that's what us Tack Hoarders are known for, right? ....searching for more tack we don't need !!!! Haaaa 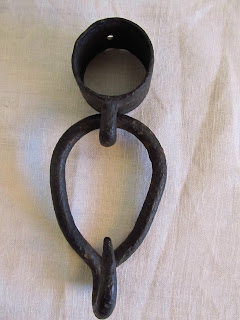 We loved your ideas, Paula!   Thanks for sharing them !!!!

It's Snowing this morning in Seattle....will Spring ever come??!!


I always find this the hardest time of year for me. The holidays are over, the days are long, cold and gray and the house seems bare since all the festive holiday decorations have come down. Ughhh….will spring ever get here ? 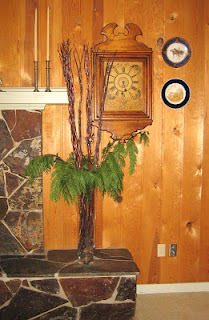 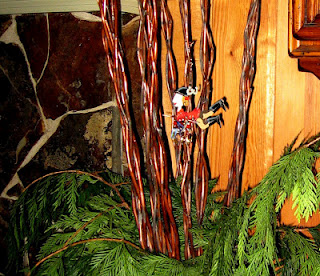 Don’t despair! You can just add a little color and texture to your space and it will help lift your spirits until spring arrives!
Here is a quick and easy way to make a dramatic touch to any room: Start by taking a tall clear vase and filling it with tall tree branches. Add some cedar or evergreen sprigs and possibly some pinecones to this arrangement. To add some visual interest you could tuck in some peacock feathers or a bird’s nest (which will remind you that spring is certainly on the way!).

Since I live on a beautiful property in the Northwest, I have the luxury of going out my door and finding a plethora of greens to pick from.
For those of you who don’t have that luxury, this is a great time of year to visit your favorite garden shop. I chose some twigs purchased at Michaels in this shot to show you how easy this is to do and added my favorite ornament for fun (to remind me not to take life so seriously!) This spot of green helps keep me going until those spring flowers start to bloom.

Also, the addition of colorful and textured textiles can instantly help a space feel livelier. Go to your local fabric store or search online for some heavier weight fabrics like tartan plaids and hounds tooth and cover an assortment of accent pillows. You can find great end roll discounts at most fabric stores for almost nothing and it is a great way to get an expensive fabric on a pillow without having to spend much.

Something as simple as just changing the lighting in a room can also help you with the winter doldrums … or just giving that old lamp a new shade.

Use these late winter months as a time to freshen your décor and you might even consider taking this time to read some of those many educational Horse books that might help us for the upcoming show season!