And we thought only Elephants Never Forget

Human friends may come and go, but a horse could be one of your most loyal, long-term buddies suggests a new study shows that Horses not only remember people who have treated them well, they also understand words. Horses remember people even after long separations. 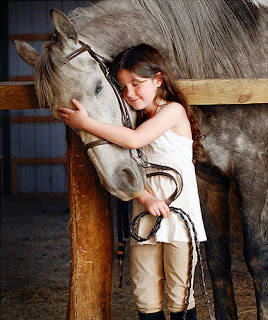 The bond with humans likely is an extension of horse behavior in the wild, since horses value their own horse relatives and friends, and are also open to new, non-threatening acquaintances.

"Horses maintain long-term bonds with several members of their family group, but they also interact temporarily with members of other groups when forming herds," explained Carol Sankey, who led the research, and her team.

"Equid social relationships are long-lasting and, in some cases, lifelong," added the scientists, whose paper has been accepted for publication in the journal Animal Behavior.

Ethologist Sankey of the University of Rennes and her colleagues studied 20 Anglo-Arabian and three French Saddlebred horses stabled in Chamberet, France. The scientists tested how well the horses remembered a female trainer and her instructions after she and the horses had been separated up to eight months.

The training program for the horses consisted of 41 steps associated with basic grooming and medical care. For example, the horses had to remain immobile in response to the verbal command "reste!" which is French for "stay." The horses also had to lift their feet, tolerate a thermometer inserted into the rectum and more. When a horse did as it was instructed, the trainer rewarded it with food pellets.

The scientists added, "Horses trained without reinforcement expressed four to six times more 'negative' behaviors, such as biting, kicking and 'falling down' on the experimenter."

Nevertheless, after the eight months of separation, the horses trained with food rewards gravitated towards the same experimenter. The horses also seemed to accept new people more readily, indicating they had developed a "positive memory of humans" in general.

"From our results, it appears that horses are no different than humans (in terms of positive reinforcement teachings)," according to the researchers. "They behave, learn and memorize better when learning is associated with a positive situation."

While people often train dogs in this way, also using verbal commands, Sankey and her team point out that "the majority of horse-riding training is based on tactile sensations -- pressure from bits, movements of riders' legs, weight change in the saddle."

Since "horses are able to learn and memorize human words" and can hear the human voice better than even dogs can, due to their particular range of hearing, the scientists predict trainers could have success if they incorporate more vocal commands into their horse training programs.

Starr told Discovery News that she's observed horses responding well to verbal commands, such as "trot," but she still feels "horses and people get along better if the person doesn't chatter, since this causes the individual to have greater awareness of body language that is more familiar to horses."

She, however, agrees that horses are loyal, intelligent and have very long-lasting memories -- of both good and bad experiences.

Starr said, "Horses can be very forgiving, but they never forget."
Posted by Mary Cox at 12:54 PM